Who should be running a Baptist church?

Should a Baptist church choose to incorporate as an association[1], it is required to have a committee. The Act under which it will incorporate[2] says that this committee, ‘has the management of the association’.

If, as is likely, the church wants to be faithful to the beliefs and practices traditionally practised by Baptists, then it will have two ‘offices’: ‘pastor’ (elder) and ‘deacon’[3].

As an incorporated association, the church should be managed by the committee. Some may think that ‘management’ is meant in the sense of ‘administration’. But the Model Rules, the rules that apply if an association doesn’t make up its own, make it clear that the powers of the committee extend well beyond administration: 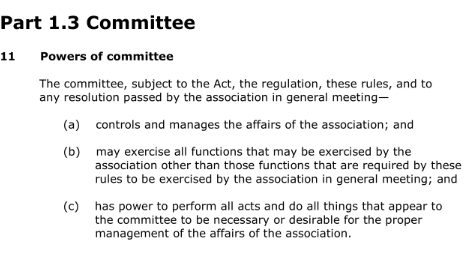 With the Model Rules requiring only one general meeting in a year (the Annual General Meeting), the leadership of the association clearly rests with the committee.

So, to match that in the church, they would be looking for those who, Biblically, are to lead. And of the two offices required, elders and deacons, that is clearly the elders:

The elders who direct the affairs of the church well are worthy of double honor, especially those whose work is preaching and teaching [1 Timothy 5:17, NIV].

5 The reason I left you in Crete was that you might put in order what was left unfinished and appoint[a] elders in every town, as I directed you. 6 An elder must be blameless, faithful to his wife, a man whose children believe[b] and are not open to the charge of being wild and disobedient.7 Since an overseer manages God’s household, he must be blameless—not overbearing, not quick-tempered, not given to drunkenness, not violent, not pursuing dishonest gain. 8 Rather, he must be hospitable, one who loves what is good, who is self-controlled, upright, holy and disciplined. 9 He must hold firmly to the trustworthy message as it has been taught, so that he can encourage others by sound doctrine and refute those who oppose it. [Titus 1:5-9, NIV].

To the elders among you, I appeal as a fellow elder and a witness of Christ’s sufferings who also will share in the glory to be revealed: 2 Be shepherds of God’s flock that is under your care, watching over them—not because you must, but because you are willing, as God wants you to be; not pursuing dishonest gain, but eager to serve;[1 Peter 5:1-2][5] (emphasis mine).

Therefore, the committee should be composed of elders. And because deacons have a quite different role in the church, freeing the elders to do their ‘job’[6], that is, lead, there should be only elders on the committee.

That’s the theory, but what about the practice? As a test I looked at the constitutions of the Baptist churches incorporated in the ACT.

Their committee is called ‘the Church Board’[7]. It consists of the Senior Pastor (ex-officio) plus ‘at least 5 other church members who are: (i) at least 18 years of age; and (ii) have been an active member of the Church for at least the preceding six months.’[8] No Biblical qualifications are required.

They do have (an unspecified number of) elders, but they have only an advisory role.

The committee has to have ‘at least 3 church members’[9]. To be eligible, the person must be at least 18, and ‘have been an active participant in the life of the church for at least 12 months.’[10] No Biblical qualifications are required.

Elders are not mentioned.

Their committee is the one that’s in the Model Rules: four ‘office-bearers’ (president, vice-president, treasurer and secretary[11]), and ‘at least three ordinary committee members’, except that two people have to hold more than one office[12]. The Bible is not mentioned.

‘The Committee shall consist of a. the officers of the Association; and b. other members…’ [Article 25]. The ‘officers’ are ‘a Chairman who shall be the Pastor of the church’, Deputy Chairman, and a ‘Treasurer-Secretary’ [Article 24]. The Bible is not mentioned.

Article 5, ‘Officers’, discusses elders, pastors, ‘deacons (deaconesses)’, and Treasurer. The committee is mentioned just once. The use of the term ‘Leadership Team, again just once[14], and the use of the statutory term ‘officers’ strongly suggests that all these people serve on the committee.

Elders must satisfy the requirements in 1 Timothy 3:1-7 and Titus 1:6-9. ‘Pastors are Elders with a special pastoral calling or gift’[15] [Article 5, page 4]. For deacons/deaconesses, the reference to Acts 6:1- 7 when explaining their role, implies that the qualification for role is that they ‘are known to be full of the Spirit and wisdom’.

‘We believe that the church should be headed by a male Pastor who will be assisted in church government by qualified men and/or women called Elders whom we empower to exercise Godly leadership over us[16].

A subsequent clause links this belief with the association requirement for a committee:

The committee of the association shall consist of, at a minimum, the senior pastor and three elders[17].

There is no age or length of attendance requirement; both are subsumed in the Biblical qualification required:

All Elders must be chosen and accepted on the basis of the Scriptural qualifications laid down in 1 Timothy 3 and Titus 1:5-9, and must have been members for sufficient time to have demonstrated their gifts and character[18].

Based on this sample, Baptist churches, at least in the legal expression of how they govern, show little adherence to the Biblical injunction that it is elders who should lead the church.