There is a later review.

This is an updated review[1] of the organisation ‘Vision Church’ (Vision), principally for those who are existing donors, or who are considering donating. The website has an invitation to help fund their new church building (towards the bottom here).

The Board’s comments have been included below. Where there is no heading Vision comment, the Board chose not to comment. It is reasonable to assume that, in these cases, our comment was accurate.

The ACNC, in their article, Donating to Legitimate Charities, gives “some things to consider to help you make sure your donation is going where it is intended”:

Here’s the results for ‘Vision Church’, with consideration also given to the essentials of the ACNC’s What should I consider when deciding which charity to support.[2]

A search on the ACNC Register for ‘Vision Church’ gives 17 charities. None are in the ACT. All churches should be registered as charities if they want exemption from income tax, so why not Vision? The answer comes via the statement on Vision’s home page that the church was ‘formerly Vision Christian Fellowship’: a search of the Register using this name brings up a registered charity in the name Vision Christian Fellowship Inc.

Vision is still Vision Christian Fellowship Inc – it’s just that it has decided to operate under a different name, Vision Church.

(The search of the Register failed because Vision has failed to record ‘Vision Church’ as a name by which it is ‘Also known as’.)

It would be unusual for a church to use either door-to-door or street collectors, and there is nothing to indicate that Vision does.

The web address begins with a closed padlock symbol, so the website is secure [the ACNC article above[3]]. However, Vision does not offer online giving.

It would be unusual for a church to be entitled to receive tax deductible gifts, and indeed Vision isn’t [‘Will my donation be tax deductible?’, Vision’s Register entry].

Here’s how Vision describes itself:

There is no mission or purpose given on the website, but their beliefs are here[4], and here are their values: 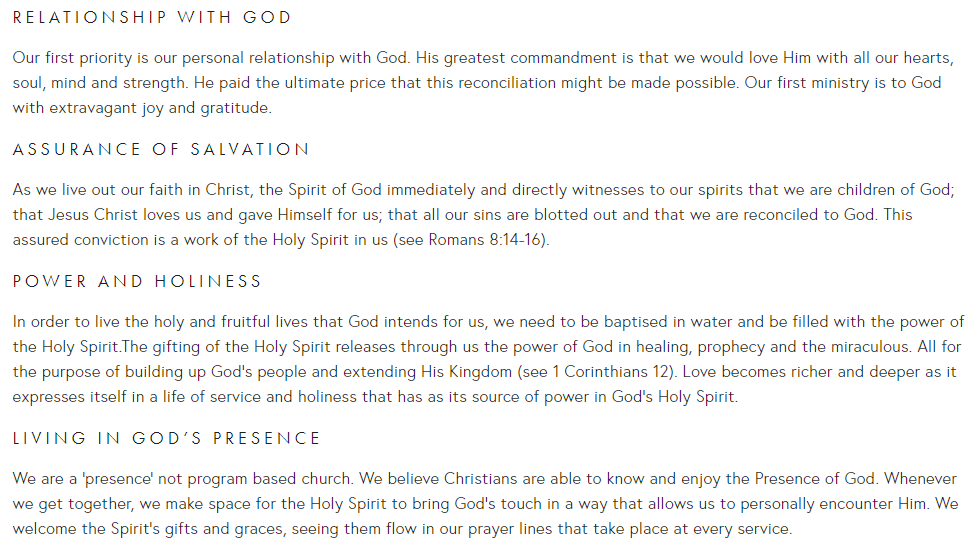 From these beliefs and values flow their activities, their ‘ministries’ [the third item in the main menu[5]]

Only two of these activities, ‘Children’ and ‘Youth and Young Adults’, are listed on the Register as ‘Charity programs’.

A fuller description of what happened last year is given in the ‘Annual Report’.

Vision operates in Australia, per the Register, only in the ACT (at 1 Lithgow Street, Fyshwick).

The omission of NSW this year implies that they are no longer running the ‘Scripture in schools’ program in NSW that they were running last year [last year’s review]. (And, given the absence of this program under ‘Charity programs’ on the Register, maybe no longer in the ACT too.)

Although they have not disclosed it on the Register, Vision ‘operate’ overseas via the ‘missions’ they ‘support’.

How activities translated into dollars spent

The audited account of how donations are used is the Financial Report 2020 on the ACNC Register.

This Report shows that the Board of Vision has continued with two significant decisions that reduce their accountability for the use of money given by donors:

“Whilst Ted is correct that both of these decision have been maintained, it is strong conviction of the Board that,the controls and accountability of all Vision financial reporting and integrity is at all times equal, and often significantly above, that which is required, and that which could be considered ‘industry standard’, when compared with other organisations of our size and nature. Specific reasoning behind these two decisions are discussed below.”

The type of financial statements

This is the reason given by the Board for choosing special purpose statements, and thus being able to report less in those statements than they would otherwise have had to:

‘Users’ are all the people and organisations who have any interest (or might have an interest in the future), financial or otherwise, in Vision[7]. It includes prospective users.

With an organisation of the size and complexity of Vision, it stretches credulity to conclude that all these users can ring the Vision office and ‘command the preparation of (financial) reports tailored so as to satisfy specifically all of their information needs’.

If you, a user, can’t do this, then you are the kind of user who is dependent on the other kind of statements, ‘general purpose’:

‘A financial report intended to meet the information needs common to users who are unable to command the preparation of reports tailored so as to satisfy, specifically, all of their information needs.’ [Glossary, aasb.gov.au].

Unlike special purpose reports, general purpose reports must comply with all the Australian Accounting Standards. More will be reported by the charity as a result – greater accountability and transparency.

The auditor, Bhaumik Bumia CA of Hardwickes[8], agreed with the Board’s choice. This is a highly questionable decision, both because of the argument given above and this opinion of his professional body[9]:

“In the Boards opinion this is not at all a questionable decision and rather it is the ‘common practice’ and ‘common sense’ decision made by organisations of our size and nature.”

“This course of action not only meets all relevant legislation”

It only ‘meets all relevant legislation’ if the correct type of statements were chosen. The evidence given in the review casts considerable doubt on that decision.

“but also provides more than sufficient information and accountability for any exisiting or prospective users.”

It is only sufficient, as least by secular standards, if the statements present a ‘true and fair view’. And this is only possible if the correct type of statements were chosen.

“Whilst we appreciate Ted’s concern with hypothetical ‘users’ that might require additional information, such users have never presented in reality, and it is doubtful that they would in fact ever exist.”

“Thus it would seem incredibly poor stewardship of resources to invest significant cost and effort in producing something that is arguably of no additional benefit.”

Here’s the auditor’s explanation for his qualification:

The Board does not explain their reasoning behind concluding that putting the necessary internal controls was ‘not practicable’.

Whether or not this decision is ‘common’ as the auditor says, is an empirical question. But whatever the answer, just because something is ‘common’ doesn’t make it right. There are numerous guides available to show churches how to avoid such a qualification. Here is the one by the Auditing and Assurance Standards Board that we referred Vision to last year[11]: And there is no shortage of examples of churches who have not received an audit qualification, and therefore, by implication, have sufficient controls to satisfy their auditor.  Here are three Canberra examples that had, like Vision, revenue greater than $1 million:

Last year Vision’s size was one size smaller, ‘Medium’.  There were a number of ‘Medium’ churches in our sample who avoided the qualification.  They include The Old Apostolic Church (Australia), even though the auditor, Eric Hummer, was the same auditor who qualified Vision’s accounts last year.

If the directors of these churches can do it, why can’t the Board of Vision?”

“As noted by our Auditors:

“As in common for entities of this type, it is not practicable for Vision Christian Fellowship to maintain an effective system of internal control over cash revenue received from offertories until their initial entry in the accounting records. Accordingly, our audit in relation to these revenues was limited to amounts recorded.” In other words this is a common qualification given to entities of our type.”

“Whilst we can-not comment on the specifics of any arrangements that other entities have with their auditors to avoid such a qualification”,

Some simple enquiries will reveal these arrangements. And then it is very likely that a ‘clean’ audit would result.

“we do note that this qualification is very common place in similar churches for example: The Anglican Parish of Wanniassa (https://www.acnc.gov.au/charity/33eebf228c0c7874a8e12d868f1997fb#financials-documents)”.

There are several other issues with the Financial Report 2020:

“It has always been the Boards intention to separately classify offerings and building fund giving. In the Boards opinion it would be incorrect not to seperatly classify these amounts”

“This relates to the Building refurbishment which should be self explanatory.“

“EOY surpluses always vary widely from year to year, such is the nature of an entity such as ours which is dependant purely upon the generosity and giving of its members.”

“This related to COVID related government payouts which were given to all churches and charities.”

This does not explain the mismatch between the Annual Information Statement and the financial statements.

“These financial accounts only cover the period until 30 June at which point the sale of the building had still not been finalised.”

But what about the contract for the refurbishment? “Noted and yes Ted is valid in his request for such disclosure.”

“All inventory in the bookstore was provided under a ‘consignment’ arrangement from a local Christian bookshop. In other words no formal inventory is purchased/ maintained.”

Given that Vision do not claim that the reason for no inventory is ‘self explanatory’ (see above), and given that the lack of information was identified last review, why not include this answer in this year’s accounts?

The use of donations

If you are still willing to rely on the accounts, this is where the donations went (with last year’s in the second column):

“In contrast to Teds suggestion, given the above there is every reason to rely upon the accounts.”

From the Board Report, Financial Report 2020, these were the people who are responsible for the financial statements:

Nothing systematic on impact was found.