This is a review for those thinking of getting involved with Shalom House, particularly those who will have to pay them money. Look into Shalom House and you will soon find the 2017 ABC story, so you might want to start there.

Start with this background.

On this page it says ‘founded on Christian Principles’ (sic), but they make no secret of the fact that there’s much more to the ‘Christian’ aspect than that. Here’s the founder, Peter Lyndon-James:

I hate religion with a passion, but I am a Christian and I say ‘how do I communicate what I know to be true without pushing religion down someone’s throat?’ But all my fellows ask Christ into their heart within the first two days; every one of my fellows is full on for God. I’ve got six fellows studying at one Bible College, and two at another Bible College. We go to three church services on every weekend because we are all different.

Get a feel for it by looking at their Facebook page.

They have done enough so that somebody else wanted to duplicate, with permission, the program. Betel Australia Ltd in Victoria.

He “said there was little evidence hard-line confrontational approaches, such as boot camp-style rehab and interventions, were effective.

“They may even be harmful to some people,” he said.

“The drug treatment field moved away from these types of interventions more than 30 years ago because we realised they just don’t work.”

“We have been rapidly moving away from these types of approaches since at least the 1980s and very few mainstream residential treatments would have any remnants of this type of approach.

“It was based on the idea that people needed to hit rock bottom, but we know this is not the case now.

“People sometimes recover from drug use problems despite these types of treatments not because of them.’’

An independent review site gives this advice for choosing a rehabilitation facility.

You can read more criticisms here.

Under the heading “SHALOM HOUSE IS FUNDED BY EX-ADDICTS” 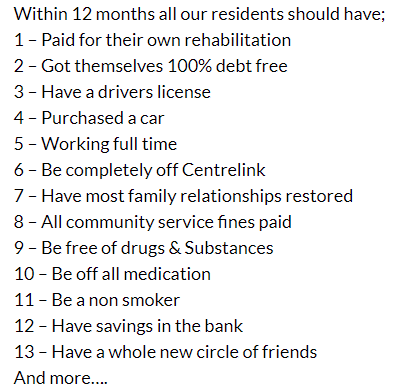 This FAQ answer encapsulates the approach of the program:

After Breaking Good aired on the ABC Dr Lee said personal experience was an important part of understanding the effects and outcomes of treatment but treatment providers needed to document basic outcomes, which accredited publicly funded service providers had to document every three months.

She was concerned there was no data to show what the relapse rates were from the Shalom House program.

He “doesn’t record stats or anything” but he recalls that in the three years Shalom House has been running, only a few people have left the house without completing the program. There is no waiting list, but the house is always full.

A Community News investigation last month revealed that only about 49 residents have officially “graduated” from the Swan Valley facility since it started in 2012 – a completion rate of 12 per cent based on an estimated 400 people who had been in the program.

Shalom House are quite willing to tell you:

But they have had to produce a report showing where the money went, so you might look at that first.

‘Shalom House’ is a registered charity, West Australian Shalom Group Inc[3]. It therefore has ongoing obligations to the ACNC, including annual reporting[4].

But as it doesn’t have ‘Shalom House’ registered as a business name (another charity has). It is therefore not trading legally.

It also doesn’t have a fundraising licence in other than its home state. That may be illegal too.

Because of Shalom House’s size, ‘Large’, it must submit audited financial statements.

One audit, once a year. There is nothing on Shalom House’s website that explains a second audit report.

An auditor gives an opinion on the financial statements. Here are the possibilities[5]: For the most recent Shalom House audit, available on the ACNC Register (but not on Shalom House’s website), the result was ‘red’ – a qualified opinion. But not just one qualification, but two: What the first one says is that the auditor was not able to verify that the transactions in the account that held the residents’ money belonged to that account rather than another. The account held 44% of the charity’s bank and cash balances.

What the second one says is that Shalom House was not able to provide sufficient paperwork to support ‘a significant portion’ of the $1.86 million ‘’Employee Benefits’. These benefits were 56% of the total ‘expenditure’.

Note that the trust account qualification arose first in 2017, three years ago. And the second qualification is not new either. As both qualifications are avoidable, this says that the directors of Shalom House were either unwilling or incapable of making the necessary changes.

The directors signed a declaration that

For this to be correct, they must have selected the right kind of financial statements. The choice was between special purpose and general purpose. The requirements for the former are less onerous than for general purpose. Consolidating any subsidiaries and reporting related parties and their transactions are the two major omissions.

The auditor, an unreadable signature on behalf of Ernst & Young, agreed with the directors’ decision.

Given the advice of their professional body[6], Chartered Accountants of Australia and New Zealand, that special purpose should be ‘the exception rather than the rule’, this is surprising:

Special purpose statements are only the correct choice only when there are no users who are dependent on the other kind for their information. And this is only the case if they can ring the Shalom House office and command the preparation of statements tailored to their needs. With 116 employees and 40 volunteers [AIS 2020], $3.6 million revenue, including $715K in donations from hundreds of supporters, $107K in government grants, and deductible gift recipient status (and Public Benevolent Institution (PBI)), this is highly unlikely.

If you don’t think that the special purpose statements decision is enough to make the directors’ declaration false, it is not the only issue:

Given all the above, perhaps an adverse opinion (see above, red) by the auditor might have been more appropriate?

From Note 11 [Financial Report 2020], these are the people responsible for the financial statements:

The website shows the same seven people as the current Board. The ACNC Register has only five directors (including a couple) – Walker and O’Sullivan have either resigned from the Board or the website is out-of-date.

Where the money went

If you are still prepared to consider supporting Shalom House, here’s what the Financial Report 2020 says about where the money went (with last year in the second column):

To supplement what you learn from the above, you might want to take them up on this offer:

We sent Shalom House a draft of this review. There’s no invitation to give feedback, and nothing specifically about complaints; nevertheless, given the above, we would expect a response.

They did not respond.