Every now and again we check the membership list of Missions Interlink, the Australian Evangelical Alliance Inc‘s ‘network for global mission‘. We do this because these charities must sign up to a set of standards, and this, at least on paper, makes them a better bet for your donations.

Not long ago ‘G.O.S.P.E.L.’ appeared in the list of ‘Associate Organisations’: 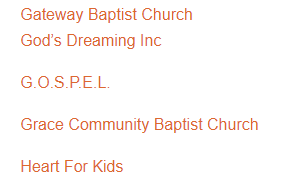 For those who are committed to reaching those who have not heard the Gospel, and have the dollars to support that, this looked promising.

So, as the charity regulator tells us to do, to the ACNC Register we go.

At least an ABN then? No.

Normally it wouldn’t be sensible to continue beyond that. Don’t donate. Swallow your disappointment and move on to the next candidate.

But we like to get to the bottom of things like this – for one reason, in case we have made a mistake.

Missions Interlink hyperlinks the names in the list. This gives a 404 error though.

Neither of these two sites solves the mystery of why Missions Interlink would admit to membership, and therefore hold accountable, an entity that doesn’t exist as a separate organisation[1].

A text to the number on the Facebook page, asking for the ABN, results in the information that G.O.S.P.E.L. is not a separate organisation, but a department of Christian Reformed Churches of Australia[2].

A Google search of its website shows that G.O.S.P.E.L is one of six activities under their ‘GROW’ ministry.

So the mystery, at least for now, remains.

(Public accountability for donor dollars to G.O.S.P.E.L.? Probably not – Christian Reformed Churches, because it is a ‘basic religious charity’ is not required by the ACNC to lodge the Financial Report that might – but probably wouldn’t – give us some information about the dollars donated to G.O.S.P.E.L. And it has never lodged the report voluntarily and it is not on its website[3].