Below is a letter I sent recently. The purpose of the letter is explained in the first two paragraphs.

In addition to sending the letter to the address below (the address for service of notices on the ACNC Register), I also (1) told finance@bcc.act.edu.au that I had sent an email to the board, and (2) sent the letter to the Chairman, Greg Zwajgenberg via Facebook Messenger (we are not Friends).

Apart from an automated response email from the address below, I did not receive a reply.

My name is Ted Sherwood. I review ‘Christian’ (and other) charities for the charity Business by the Book as an aid to stakeholder decision-making. After giving the charity the opportunity to suggest corrections and to add their comments, I publish the review on tedsherwood.com.

Recent articles in The Canberra Times (including this one) and RiotACT show that there is considerable interest in the governance and finance of BCC within the BCC community (and, presumably, by some of the prospective parents and teachers, and no doubt with some of your suppliers and funders). I have therefore had a look at the public documents of and about your charity and compiled a list of questions, the answers to which I think that many of these stakeholders (present and potential) will be interested. 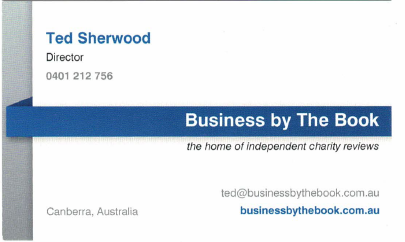